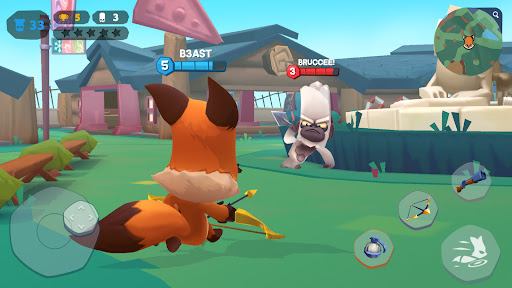 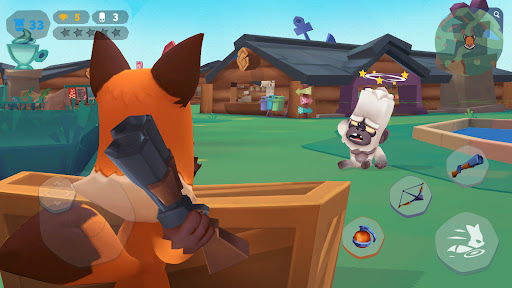 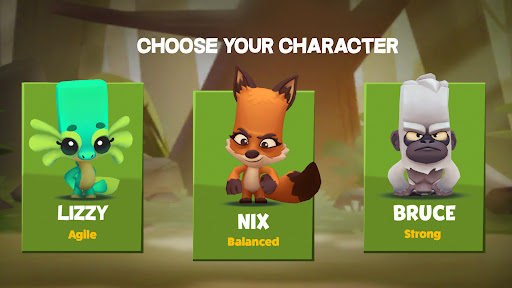 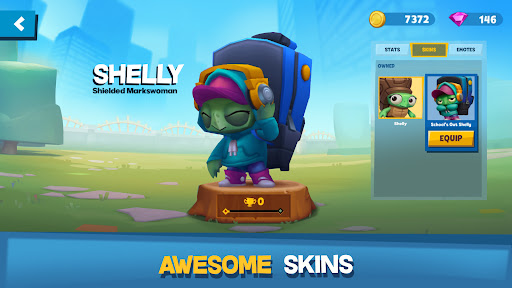 Currently, MOBA and Battle Royale are two popular genres on

Google Play and App Store. In particular, players around the world are waiting for the launch of LOL Mobile, a new breakthrough of League of Legends which

has been very attractive. So have you ever thought about combining these two categories? While waiting for League Of Legends Mobile to launch, I will introduce you to an equally interesting game, that is Zooba.

Zooba (short for Zoo Battle Arena) is a turning point for modern games today. With the perfect combination of MOBA and survival genre,

Zooba takes you into an exciting animal world with survival battles to find out who is the King of the zoo.

Many call Zooba the zoo version of PUBG Mobile. Because in the game, you can choose a lot of characters. They are all funny animals that you often see in the zoo or in animal world TV series.

Each character has its own weaknesses and strengths. In the first battle, there are 1 in 3 animals available for you to choose from. This number will increase.

You can choose according to your preferences and tactics. For example, Bruce is the powerful gorilla, Larry chameleon with offensive sneaking talent…

When you reach a higher level and earn more gold, you can unlock more characters. So, from the outset, all you need to do is master the power of the available characters and learn how to fight on the battlefield.

Choosing the right playing style for each match will help you master the battlefield. Become a true king of the jungle.

Battles in Zooba are fierce arenas just like PUBG or Fornite. In the first place, you and 19 other players are sorted into PvP matches without any weapons.

Quickly search everywhere to find weapons and new skills. You can pick up up to 3 weapons along with 1 basic skill available to be ready to face enemies.

And like MOBA games, those skills will have cooldown time, requiring you to use flexibly.

In addition to using the skill proficiently, note that the enemy can be anywhere and defeat you if you lose your guard.

So in every match, you have to have a high concentration. And one thing that is obvious in any survival game is, it is a safe zone, which will make you die slowly if you do not enter the safety zone in time.

Therefore, finding a spot in a safe zone makes it possible for you to be safe in the final rounds and towards the 1st rank. In fact, the possibility of surviving depends on your skills and a bit of luck.

You may have the advantage of being in an area with many weapons and few enemies.

In each battle, there are many weapons and items scattered on the battlefield. If you’re lucky, you will soon find good equipment.

Weapons are a very important factor in deciding victory in a face-to-face battle. So, with good equipment, you can hold more than 50% of the victory.

If you find it difficult to collect equipment, good advice for you is that, go kill enemies. Because, every time you defeat an enemy, you will receive loot from them as a “tribute”.

And more specifically, at a certain time, there are Air Drops appear to contain the most advanced equipment. This is the place that attracts the most players and unintentionally drags them into fierce scrambles.

Therefore, do not be too mindful of items when you have enough equipment if you do not want to die in unexpected fights.

In addition to fighting with many players in fierce survival battles, you can play with your friends in fun PvP battles. The game has two modes Solo and

Duo. In Duo Mode, you can play with friends, survive together in fierce battles. Win and boost your rankings on the global rankings.

Zooba has eye-catching 3D graphics with a variety of backgrounds and colorful designs such as volcanoes, deserts or ice ages…

The diverse environment helps you not be bored. More specifically, the characters are shaped cute, but no less cool, besides the special skill effects for each character.

That makes you don’t want to ignore any characters.

Understanding the difficulty of the players, APKMODY Team has successfully MOD the feature Unlimited Sprint Skills.

This MOD feature allows you to use Sprint Skills without waiting for cooldown.

Zooba is a unique combination of the two types of Battle Royale and MOBA. With attractive gameplay, fast-paced but still many tactics,

the game can make you play for hours without feeling bored. Cute, funny character designs make the game suitable for all audiences, including children. Are you ready to fight to find the King of the zoo?

The animals are loose in Zooba!
Can you be the last one standing in a hilariously fun battle royale game? Battle with the guards and up to 45 other players across fun game modes, and take your place as king of the zoo!

DISCOVER YOUR INNER BEAST
Play over 20 fun and unique characters, each with distinct strengths, weaknesses and special abilities.

EVOLVE AND CUSTOMIZE
Upgrade your characters, unlock dozens of items to fit your play style, and impress your competition with dozens of fun skins and hundreds of fun emotes. Game on!

BE THE STRONGEST, TOGETHER!
Invite your friends to play with you in multiplayer game modes. The more the merrier!

KING OF THE ZOO
Battle to the top of the food chain by climbing leaderboards, completing fun missions and collecting awesome rewards each season.

Jump right in and play this fun battle royale game!!
DISCLAIMER: No animals were harmed in the making of this game.

TOP FEATURES
– Choose from over 20 fun characters, from Nix the crafty fox to Pepper the doubtful giraffe, with more being added to the game all the time!
– Battle against 45 other players across multiple game modes

– Upgrade your character and items
– Climb through the ranks to earn amazing free prizes
– Zoo VIP filled with rewards
– And much more!

Hey Zoobsters!This update brings quality of life improvements so the Guards can have a better time looking after the characters/animals! The Zookeepers are also hard at work invesitgating some bug fixes caused by Louie after he chewed on some cables!See you at the Zoo!
Unlimited Sprint Skills
Installing games and programsInstalling games with a cacheHow to make a screenshot
Safe to Download