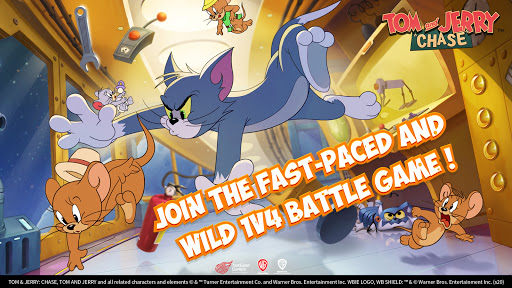 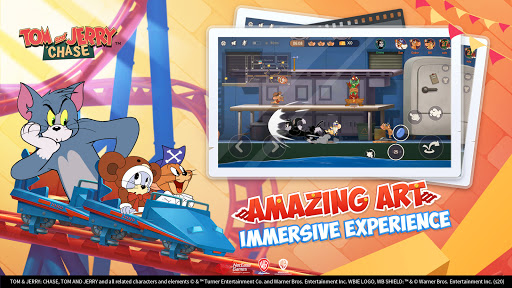 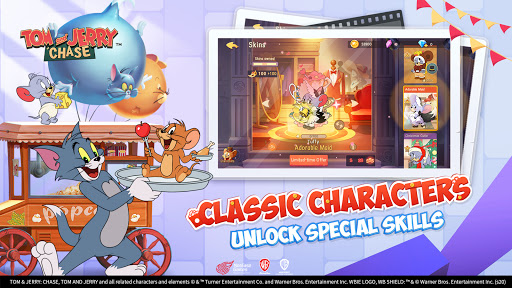 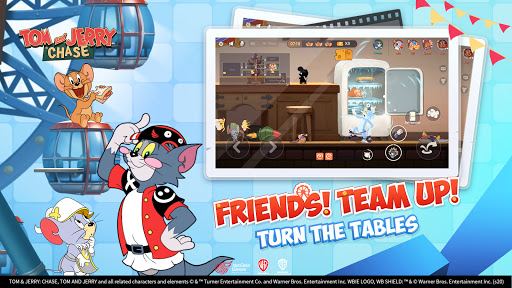 Introduce about Tom and Jerry: Chase

Tom and Jerry: Chase is a competitive 1v4 game, but the game has a fun style when bringing characters from the famous cartoon Tom and Jerry into its game. NetEase has been licensed by Warner Bros so that they can create a game with characters associated with childhood, to create a sense of nostalgia when participating in this game. The Tom and Jerry cartoons are recreated through this classic original style game.

Tom and Jerry is a cartoon associated with our childhood. Although the story simply describes the three words “cat chase mouse”, but it is very attractive to viewers from children to adults. Netease does not want to lose its original identity, so they also put the plot of the original movie into the game, thereby developing a game of chasing similar to the plot of the movie instead of developing it into a different genre from its inherent content.

However, it is not fair for a big cat to fight with a tiny mouse. This time, cat Tom have to chase four mice looking for cheese. Who will win?

If you have ever known or played Dead By Daylight Mobile or Identity V, you will very quickly to get acquainted with the game Tom and Jerry: Chase. Basically, you will be able to choose to control the cat side or mouse side. It’s like a game of chasing, if you are a cat then you chase the mouse. And if you play as the mouse, you will have to find cheese and push it into your cave and of course, do not let the cat catch you.

For example, if you choose the mouse side, in the beginning, you will control a robot mouse to spy on the house and find the location of the cheese to save more time. If you are a cat-side, you can destroy those rats to make the mouse-side spend time searching, increase the time to chase and eliminate annoying opponents.

The game allows you to control the character with touch arrow buttons or Joystick buttons. In addition, there are some skill buttons for each character that can be learned when leveling up like in MOBA games.

Basically, the most prominent monument throughout the movie is character Tom and character Jerry. But Tom and Jerry: Chase has characters that appear very little in the series to create variety for the game such as Butch, Lightning, Jerry Robinhood, Jerry Detective, Tuffy…

Each character has unique skills, make sure to read them carefully before joining the match. In particular, the game is also very interested in aesthetics when the characters have their own costumes.

Our battle will not be merely an empty house when lots of cool items are popping up everywhere. The game also has many interesting items such as ice, bazooka, explosives… The endless chase will be more interesting and tactical when there are those items.

Tom and Jerry: Chase also allows you to play the custom matches with your friends like other MOBA games, but not 10 people but up to 5 people. You absolutely can communicate, chat with friends right in the game without any other software.

Admittedly, Netease knows how to exploit and use it best when the characters associated with childhood have quite similar drawings to the original movies. This is a big plus that helps the game attract a lot of players.

In particular, the game also supports High Frame Rate (maximum 60 FPS) and HD graphics to meet the needs of players to have the smoothest experience possible.

In addition, the map is also very diverse and elaborated with each stroke. The chase battle can take place at sea, indoors, castles, yachts… The sound is also especially invested, making you feel like you are enjoying a Tom and Jerry episode that you have ever “addicted” as a child.

Even when made into an Android game, Tom and Jerry still retains the trait that makes it more interesting than ever.

You can download this game on our website and get the earliest and fastest updates. Please leave a review and comment below the article if you have questions or problems when playing this game.

The game perfectly recreates the art style of the original classic. Players can choose to play as Jerry or his friends in their effort to steal cheese, or play as Tom to stop them from succeeding.

Who will win in this battle of wit and might? Join over a million players and dive into the ultimate game of cat and mouse. Feel the thrill of the chase!

Game Features
1.[Competitive asymmetric multiplayer game] Play as either cat or mouse. Steal cheese and trick Tom with your friends to win.

Or rescue Tom from his fate of never being able to catch Jerry and help him become a mouse-catching expert. The action never stops!

2.[A classic reborn in HD graphics and high performance] Recreating the original animation just the way you remember it. Original music, an authentic retro art style, and lag-free gameplay bring you a truly immersive experience!

3.[Free to play, easy to get started] A single game provides up to 10 minutes of fast-paced action and mayhem. Complete free quests to earn gold, enough for you to shop to your heart’s content!
4.[Distinct characters, diverse items]

Tom, Jerry, Tuffy, Lightning. All your familiar friends are here! Each character has their own unique skills. There are also many different items to find on the map, such as forks, ice cubes, photo frames, and various special drinks.

Use them wisely to turn the tide of battle!
5.[Interesting game modes and maps] Players can cycle through many unique modes including Classic Mode, Golden Key Match, Fun with Fireworks, Cheese Frenzy Match, and Beach Volleyball.

Each mode provides its own distinct gameplay. Combined with a variety of different maps, including Classic House, Summer Cruise, and Night Castle, this ensures that every game is a fresh experience!

6.[Endless fun with friends] Play as a mouse and form a 4-player team with friends. Communicate through the built-in voice chat, change your strategy on the fly and show Tom who’s boss!